It is said that the Wewelsburg was going to be the “Grail Castle” of the Nazi regime, once it had established itself as rulers of the world. Is this true, and, if so, what was their ambition in this vast building project?

It is clear that any Grail Castle to be built would have a geometrical design, and in the case of the Wewelsburg, that is a triangle. For Himmler, the Wewelsburg was not so much the location where the Grail was hidden, but where his Grail Order – the SS, the Schutzstaffel – and its sacred treasures – rumoured to be the Spear of Destiny – would be brought, and from which the magical power of the Nazi regime would radiate out.

The castle was not built by the Nazi regime; its history started several centuries before the National Socialists came to power in 1933. In its current form, the castle was built from 1603 to 1609, as a secondary residence for Fürstbischof Theodor von Fürstenberg, the prince-bishop of Paderborn, whose primary residence was the castle at Neuhaus. However, there existed a castle on the site from the 9th century onwards. At the time, it withheld an invasion of the Huns, its location near what was believed to be the site where the Battle of the Teutoburg Forest occurred. This battle occurred in 9 AD, when various Germanic tribes made an alliance and ambushed and destroyed three Roman legions. The battle was the start of a seven year long war, whereby the Rhine became the boundary of the Roman Empire. It should therefore not come as a surprise that it was seen as a symbol of German unity and a demonstration that a united Germany could conquer all – as it was, of course, felt it would do again….

The Nazis plans: put into effect by the use of slave labour…

It meant that the estate had the shape of a spear, underlining the unconfirmed belief that the site would become the location where the Spear of Destiny would be held. One story goes that Hitler saw his future when he visited the Museum in Vienna where the Spear was on display, and that he became convinced that whoever possessed it, controlled the fate of the world. That the Wewelsburg was going to be the New Jerusalem and the centre of Germany is in evidence as from 1941 onwards, the architects called the complex the “Centre of the World”. In line with sacred mythology, the design would sit on a mountain, surrounded by a lake, as there were plans to flood the valley.

All Himmler’s SS Mystical Castle: Wewelsburg Trips are £449 per guest plus £30 a night single room supplement, where applicable.

Guests fly to Dortmund where they are met by the MHT Team. After collecting the mini bus the group sets off for the Castle driving through the Ruhr Valley and passing the mighty Dams “busted” by the RAF back in ’43. After the hour long journey we arrive at our hotel where we get checked in before heading off to the Castle itself.  Here get our first impressions and discover the lie of the land before heading back for a rest then dinner.

Day Two sees us at the Castle going through it’s history and tying the story into the ideological/mysticism of the Nazis. By reference to various alternative theories we are able to piece together what Himmler and his SS were seeking to achieve not just architecturally but also what the symbolism represented. We explore the history of the SS and their rise throughout the 1930s and the role they played during the war. We also visit the museum and see how the Nazis used slave labour to go about achieving this purpose as well as how the camp structure existed in WW2.

Day Three we are back at the castle and discuss it capture by the American’s and use it as a back drop to explain the wider story of how Himmler sought to bargain with the Western Allies towards the end of the war, and his ultimate fate. We then head back to Dortmund for our evening flights back to the UK.

The vault, which some have labelled the “Himmler Crypt”, was, according to some claims, going to be the site where Himmler was going to be interred after his death. The swastika in the crypt’s ceiling is physically linked with a sun wheel that is embedded in the centre of the marble floor of the Obergruppenführersaal above.

Just £100 deposit secures a place on the trip. E mail or call us today to book your place. 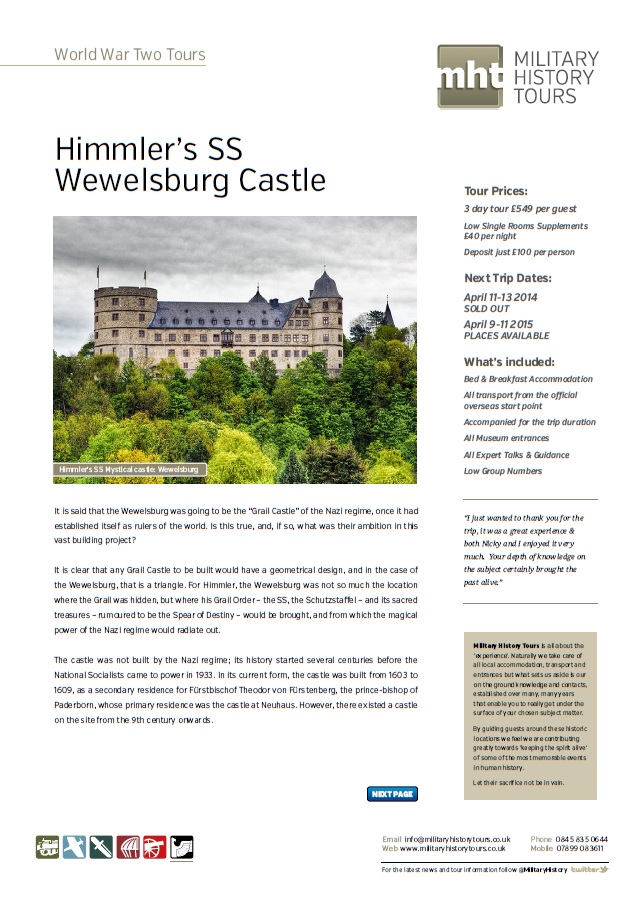