Oflag IVC, “Colditz”, the infamous WW2 POW Sonderlager or ‘Bad Boys Camp’ for Allied Officers.  Made famous by the old 1955 black & white John Mills film and the 1970’s TV series starring David McCallum. Colditz truly is an amazing place. Here the Germans attempted to collect all the prolific escapers and high profile prisoners in order to keep them under lock and key. Instead they created an ‘Escapers University’ – with more “Home Runs” from Colditz than any other POW camp! Come and let us show you how they did it… 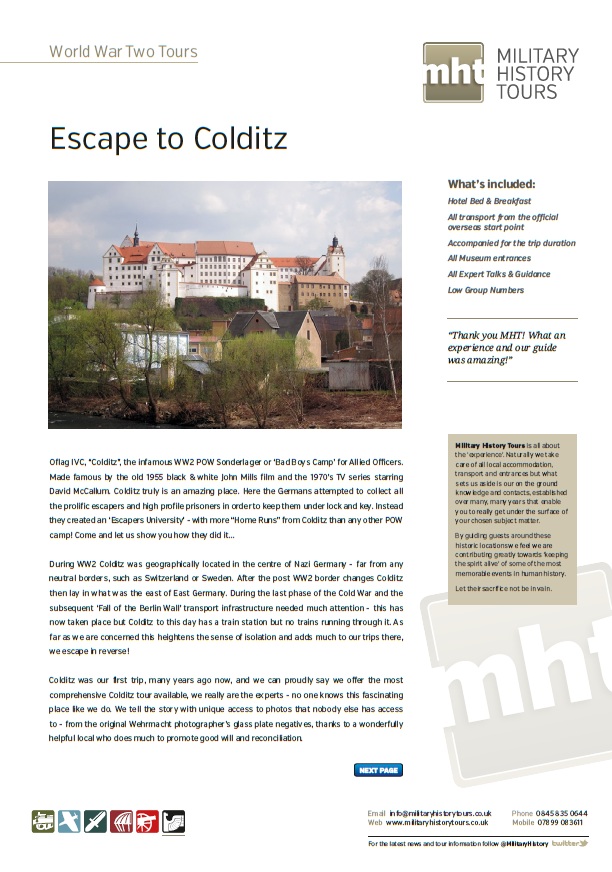 During WW2 Colditz was geographically located in the centre of Nazi Germany – far from any neutral borders, such as Switzerland or Sweden. After the post WW2 border changes Colditz then lay in what was the east of East Germany. During the last phase of the Cold War and the subsequent ‘Fall of the Berlin Wall’ transport infrastructure needed much attention – this has now taken place but Colditz to this day has a train station but no trains running through it. As far as we are concerned this heightens the sense of isolation and adds much to our trips there, we escape in reverse! Colditz was our first trip, many years ago now, and we can proudly say we offer the most comprehensive Colditz tour available, we really are the experts – no one knows this fascinating place like we do. We tell the story with unique access to photos that nobody else has access to – from the original Wehrmacht photographer’s glass plate negatives, thanks to a wonderfully helpful local who does much to promote good will and reconciliation.

Day One Guests are met by the MHT Team either at Berlin’s Schonefeld Airport Arrivals at 09:00 or slightly later in the centre of Berlin as some guests will have travelled out beforehand (Central Train Station/Hauptbahnhof meeting point). From here the party are conducted down to Colditz, mainly by Inter City Express train, but partly by bus, arriving early afternoon (there may be a station at Colditz – but they have no trains!). On the way guests get a real sense of what escaping POWs went through on their escape journeys, especially when changing at the magnificent Leipzig station. Guests are then shown the old abandoned Colditz train station, the starting place of so many a POW’s enforced stay at Colditz. From here prisoner’s, sorry guests, catch their first glimpse of the castle before being taken on the POW’s route up to the castle to have the camp layout explained and absorb the atmosphere for the first time. We stay locally and at night it is possible to go on a moonlit walk to really get into the real spirit of the occasion – creeping around as an escaped POW really will make the hair on the back of your neck stand up!

Day Two is all about escapes: we go up to the castle to have the German Kommandatur explained before seeing inside the building itself. From here guests are shown various Germans Courtyard buildings before being taken up the causeway, past the arrest cells, past the guardhouse, through the ‘eye of the needle’ before finally entering the prisoners yard. Here we see the solitary confinement cells, the parcel’s office, the sick bay, Gephard’s office, the chapel, wine cellars, potatoe cellars, the barbers, dentist, Prominente cells, canteen, kitchens, shower blocks, west terrace and of course the theatre. All the areas have so many escapes connected to them. Indeed we have been known to go through over 30 escapes in one day, occasionally re-enacting them with guests! We also see around the castle and down in to the exercise park where nearly half of all the successful “home runs” started from. There is so much to see if you know where to look – as nothing is signposted.

Day Three sees us uncovering the hidden WW2 Colditz Story areas in town – such as the iron mongers that mended Douglas Bader’s legs, the extra solitary confinement cells, the fomer Adolf Hitler Bridge, the other part of Colditz POW camp, the Concentation camp (and the massacre of Jews there)- and the initial grave of Mike “The Red Fox” Sinclair, the ‘Greatest Escaper’ of all. We hear about the special group of prisoners, “The Prominente”, who were gathered at Colditz and were part of an SS plan to ransom these relatives of the British Royal family and Winston Churchill – and how one group of SS saved them from another! We end our story by discussing how a clandestine group of prisoners, headed up by the founder of the SAS, managed to take over the castle as the Americans were arriving in town. Finally, we spend time in the wonderful little museum exploring the array of artifacts on show before leaving for Berlin early afternoon, arriving early evening.