Operation Jericho was a low-level bombing raid by Allied aircraft on Amiens Prison in German-occupied France on 18 February 1944. The objective of the raid was to free French Resistance and political prisoners. The raid is remarkable for the precision and daring of the attack, which was filmed by a camera on one of the planes. Mosquito bombers succeeded in breaching the walls and buildings of the prison, as well as destroying guards’ barracks. We also explore Mosquito Raids on V Weapons sites in the nearby vacinity. 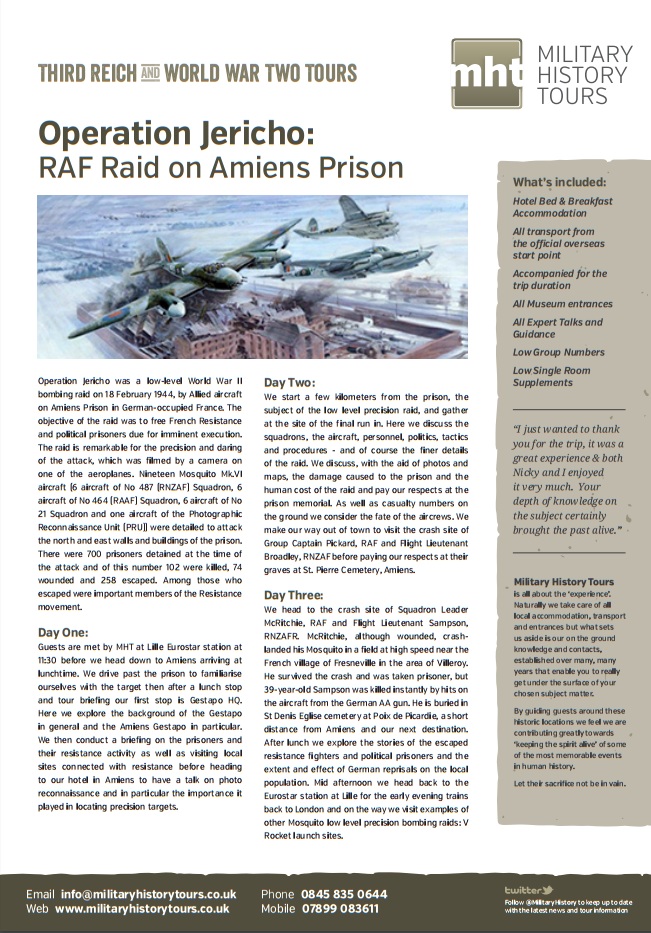 Operation Jericho was a low-level World War II bombing raid on 18 February 1944, by Allied aircraft on Amiens Prison in German-occupied France. The objective of the raid was to free French Resistance and political prisoners due for imminent execution. The raid is remarkable for the precision and daring of the attack, which was filmed by a camera on one of the aeroplanes. Nineteen Mosquito Mk.VI aircraft (6 aircraft of No 487 (RNZAF) Squadron, 6 aircraft of No 464 (RAAF) Squadron, 6 aircraft of No 21 Squadron and one aircraft of the Photographic Reconnaissance Unit (PRU)) were detailed to attack the north and east walls and buildings of the prison. There were 700 prisoners detained at the time of the attack and of this number 102 were killed, 74 wounded and 258 escaped. Among those who escaped were important members of the Resistance movement.

Day One: Guests are met by MHT at Lille Eurostar station at 11:30 before we head down to Amiens arriving at  lunchtime. We drive past the prison to familiarise ourselves with the target then after a lunch stop and tour briefing our first stop is Gestapo HQ. Here we explore the background of the Gestapo in general and the Amiens Gestapo in particular. We then conduct a briefing on the prisoners and their resistance activity as well as visiting local sites connected with resistance before heading to our hotel in Amiens to have a talk on photo reconnaissance and in particular the importance it played in locating precision targets.

Day Two we start a few kilometers from the prison, the subject of the low level precision raid, and gather at the site of the final run in. Here we discuss the squadrons, the aircraft, personnel, politics, tactics and procedures – and of course the finer details of the raid. We discuss, with the aid of photos and maps, the damage caused to the prison and the human cost of the raid and pay our respects at the prison memorial. As well as casualty numbers on the ground we consider the fate of the aircrews. We make our way out of town to visit the crash site of Group Captain Pickard, RAF and Flight Lieutenant Broadley, RNZAF before paying our respects at their graves at St. Pierre Cemetery, Amiens.

Day Three we head to the crash site of Squadron Leader McRitchie, RAF and Flight Lieutenant Sampson, RNZAFR. McRitchie, although wounded, crash-landed his Mosquito in a field at high speed near the French village of Fresneville in the area of Villeroy. He survived the crash and was taken prisoner, but 39-year-old Sampson was killed instantly by hits on the aircraft from the German AA gun. He is buried in St Denis Eglise cemetery at Poix de Picardie, a short distance from Amiens and our next destination. After lunch we explore the stories of the escaped resistance fighters and political prisoners and the extent and effect of German reprisals on the local population. Mid afternoon we head back to the Eurostar station at Lille for the early evening trains back to London and on the way we visit examples of other Mosquito low level precision bombing raids: V Rocket launch sites.