The Norwegian heavy water sabotage was a series of operations undertaken by Norwegian saboteurs during World War II to prevent the German nuclear weapon project from acquiring heavy water (deuterium oxide), which could have been used by the Germans to produce nuclear weapons. Between 1940 and 1944, a sequence of sabotage actions, as well as Allied bombing, ensured the destruction of the plant and the loss of the heavy water produced. These operations—codenamed Grouse, Freshman, and Gunnerside—finally managed to knock the plant out of production in early 1943.

In 1934, at Vemork, Norway, Norsk Hydro built the first commercial plant capable of producing heavy water as a byproduct of fertilizer production. It had a capacity of 12 tonnes per year. During World War II, the Allies decided to remove the heavy water supply and destroy the heavy water plant in order to inhibit the German development of nuclear weapons. Raids were aimed at the 60 MW Vemork power station at the Rjukan waterfall in Telemark, Norway.

Prior to the German invasion of Norway on 9 April 1940, the Deuxième Bureau (French military intelligence) removed 185 kg (408 lb) of heavy water from the plant in Vemork in then-neutral Norway. The plant’s managing director, Aubert, agreed to lend the heavy water to France for the duration of the war. The French transported it secretly to Oslo, to Perth, Scotland, and then to France. The plant remained capable of producing heavy water.

The Allies remained concerned that the occupation forces would use the facility to produce more heavy water for their weapons programme. In Operation Grouse, the British Special Operations Executive (SOE) successfully placed four Norwegian nationals as an advance team in the region of the Hardanger Plateau above the plant in October 1942. The unsuccessful Operation Freshman was mounted the following month by British paratroopers; they were to rendezvous with the Norwegians of Operation Grouse and proceed to Vemork. This attempt failed when the military gliders crashed short of their destination, as did one of the tugs, a Handley Page Halifax bomber. The other Halifax returned to base, but all the other participants were killed in the crashes or captured, interrogated, and executed by the Gestapo.

In February 1943, a team of SOE-trained Norwegian commandos succeeded in destroying the production facility with a second attempt, Operation Gunnerside. Operation Gunnerside was later evaluated by SOE as the most successful act of sabotage in all of World War II.

These actions were followed by Allied bombing raids. The Germans elected to cease operation and remove the remaining heavy water to Germany. Norwegian resistance forces sank the ferry, SF Hydro, on Lake Tinn, preventing the heavy water from being removed.

Guests are met at Oslo International airport before before driven 3 hours west to the Telemark region. Along the way we will stop for lunch and we will see beautiful scenery as we head up towards Rjukan where we check in to our hotel. Our accommodation is a lovely historic venue closely connected to our story and one which was commandeered by the Germans during the war.

After check in we then head out in the vehicle up on the Hardangervidda plateau to the national park and it’s information centre at Skinnarbu. On the way up to the plateau we get our first glimpse of the object of the raid: the Hydrogen Plant at Vemork. At the centre we have our initial tour briefing before watching a documentary starring the actual heroes of the raid and made by the local people behind the museum. For those that wish to there is the opportunity to use shoe shoes and poles and go for a walk (approximately 3 miles) which takes in the Grouse hide out hut and the Freshman Land Zone. This walk will be weather dependant. We then return to our accommodation for the evening. On this first day we concentrate on Operation Grouse which went on to become Operation Swallow and end our day at the intended Landing Zone for the ill fated Operation Freshman. The light will be going by this stage and if the weather prevents a cross country walk we will drive to the Landing Zone and arrive in the dark so as to get a sense of appreciation of what it would have been like for the men on the ground waiting for the landings.

We begin our day by heading up to the Vidda to carry on where we left off the day before, at the Freshman Landing zone. Our emphasis now switches to Operation Gunnerside and we drive to Vemork following the route of the raiders. On the way we stop at a little restaurant that houses a wonderful little museum which has various artefacts to do with the operation. It is a very old cabin and a wonderful location to warm up with a hot drink and imagine back to the war time era. It is located here as a hideout was close by. We drive to Vemork then park at the location where they crossed the road and made their way down into the ravine and climbed up the other side, the factory side. Guests can view from the top and get a sense of what it must have been like on the mission. Once across they made their way along a small railway line to the factory. We drive along parallel to their route and as we approach the Hydrogen Factory ravine we park our vehicle and guests have the option of either walking across the single track bridge over the ravine or they can use the shuttle mini bus that operates on site. At the top of the roadway we pick up our story at the metal gates they had to come through to enter the restricted area before going inside the factory. We then go into great detail about what happened next before entering the building to explore all there is to see. As well as a the generator hall there is also a couple cinema rooms where we see productions made by the museum as well as a cafe area where a late lunch can be had. It is then time to pick up the Gunnerside story and follow the escape route out of town to where they climed the mountain. We end our afternoon by discussing in detail the subsequent US aerial bombing of the factory before heading back to our hotel.

On our last day we consider the third and final attack on the heavy water operation by the Germans, the sinking of SF Hydro on Lake Tinn as the ferry carried the wagons which housed the barrels. Sadly there was considerable loss of local civilian life. We travel to the lake and have thus far been able to gain access on to and inside the sister ship of the SF Hydro. We get to see where the bombs were planted as well as go above and below decks to get a sense of what the SF Hydro was like. We then drive around the lake to the memorial to pay our respects to those who lost their lives in the sinking. We then return to Oslo airport arriving late afternoon and on the way stop of at a cemetery where some of the POWs who were executed after Operation Freshman are buried.

It is a fascinating story and one we and the locals try hard to keep alive through the enduring friendship between the two countries. 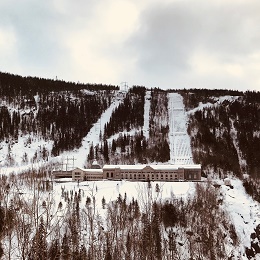 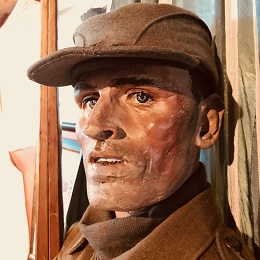 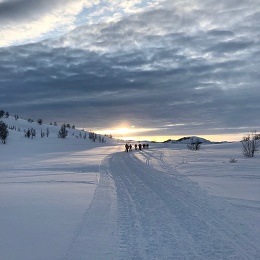 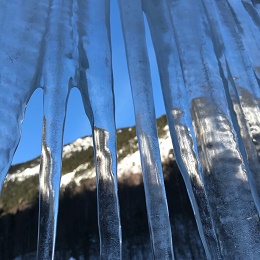 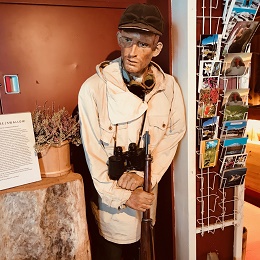 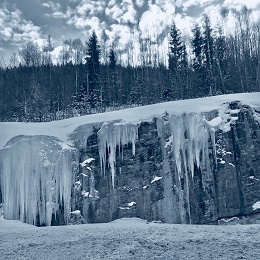 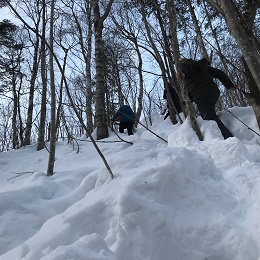 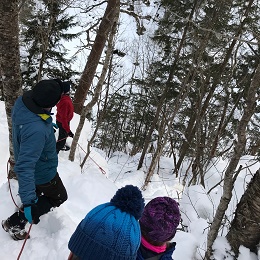 Ravine route to the factory 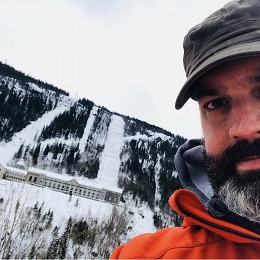 Remote location at Vemork for the target 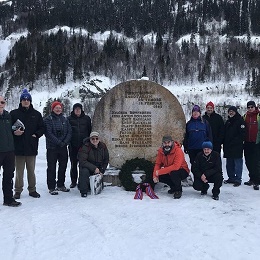 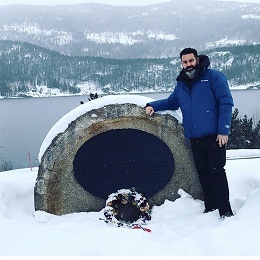 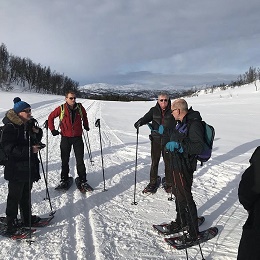 Up on the Vidda 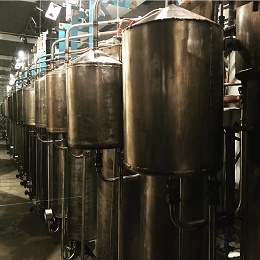 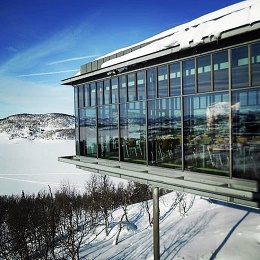 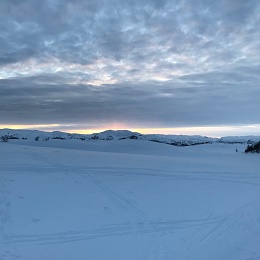 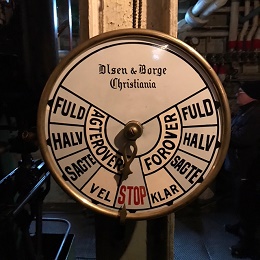 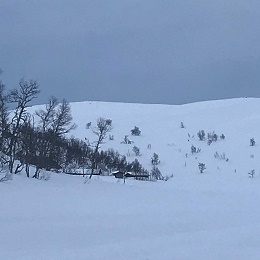 Grouse hide out hut on the Vidda 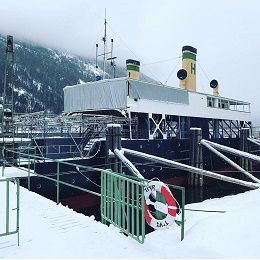 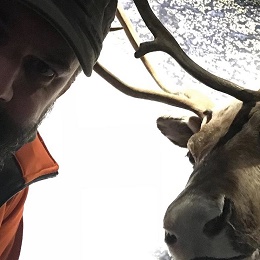 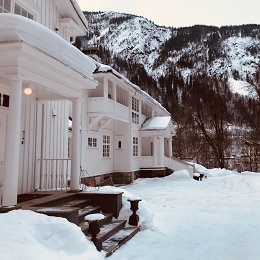 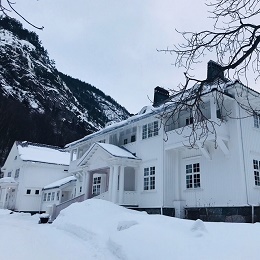 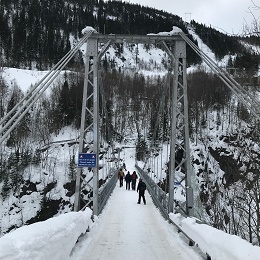 Bridge across the ravine 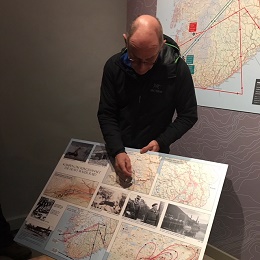 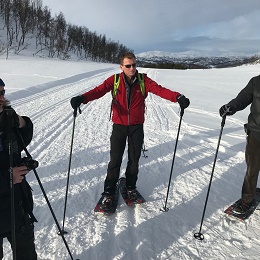 Snow shoes & poles for those that want to