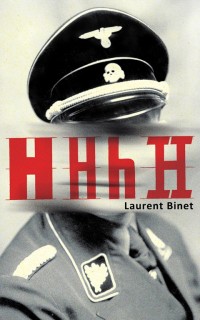 HHhH is the debut novel of French author Laurent Binet. It recounts Operation Anthropoid, the assassination of Nazi leader Reinhard Heydrich in Prague during World War II. It was awarded the 2010 Prix Goncourt du Premier Roman.

Don’t be put off because this book is categorised as fiction, it isn’t! Within its pages is the true story of Operation Anthropoid, the assassination of Reinhard Heydrich, Acting Reich Protecktor of the Nazi State of Bohemia and Moravia, otherwise known as the Blond Beast, the Hangman of Prague, the Butcher of Prague, and the most dangerous man in Nazi-occupied Europe.

The author, Laurent Binet, uses a unique method to write this book, telling the story through his overwhelming need to write about Anthropoid.  During his narration he recounts incidences with a past-Czech girlfriend and imagines conversations or scenarios between the main participants.  Its true you could question one or two of the assertions but overall, Binet faithfully follows the true story of Anthropoid.

The black and sinister character of Heydrich is the central figure and we follow the Heydrich life story and learn how he rose to such a key and powerful position within the Nazi Reich, playing significant roles at various stages of the most darkest moments of Nazi history.

If Heydrich is quite rightly portrayed as evil then Binet unashamedly lavishes praise on the heroes of the story.  These are ostensibly our Anthropoids, Josef Gabcik and Jan Kubis, but Binet also uses this opportunity to give profile to the Czech resistance movement from within the Protectorate and the many brave and courageous individuals that assisted our assassins.

Gabcik was a Slovakian and Kubis a Moravian. They were chosen for this operation by the Czech Government in Exile so as to represent both elements of what until 1939 had been the Republic of Czechoslovakia.  As it turned out, these two very different characters had also become best of friends during their brief time fighting with the French Foreign Legion in 1940, and subsequent escape to Britain following the collapse of France and the establishment of the Czech army, which took their orders from the exiled President Benes.

Anthropoid can be a complicated story because the main witnesses either died in the Battle of the Crypt or were murdered by the Nazis at Mauthausen.  Those few that survived only knew with any accuracy the often small parts that they performed in the story and their collective accounts often contain contradictory evidence.  However, Binet will steer you through those contradictions and complications.  The backdrop of his own personal anxieties in telling the story ensures this isn’t a dry or difficult read.

HHHH is a welcome and enjoyable addition to the history of Operation Anthropoid.  Although unrelated to Binet’s award winning fact-based novel, it is no coincidence that five years following the publication of HHHH, a new movie called Anthropoid, directed by Sean Ellis, is currently being filmed in Prague.

If you want an introduction to Operation Anthropoid or even if you already have detailed knowledge of the assassination, HHHH should contain something for you.  Binet writes short chapters that I found  very convenient and his style is very readable (it is translated into English from Binet’s native French).  His dedication to accuracy and historical fact means the book is a tool of learning.  As Binet realised, when the truth is actually this good then you really don’t need fiction, or certainly not much of it.

And finally, why did Binet eventually settle on calling his book HHHH? Well it wasn’t his first choice but HHHH stands for a common saying heard in Nazi Germany, Himmler’s Hirn heisst Heydrich (Himmler’s brain is called Heydrich).

Read it!  I don’t think you will be disappointed.