Stalag Luft III, better known as The Great Escape Camp, was located just south of the German town of Sagan. These days the camp is largely overgrown and is located near what is now the Polish town of Zagan. The area has a long history of warfare and graves in the cemetery near the camp date back to Napoleonic times. Due to its location on the West East train route from Berlin the town has a significantly large train station and junction. These days it still operates but on a much reduced level, but once upon a time it was a key rail location. The rail network and its distance from the Baltic coast and neutral countries made it an ideal location for a Prisoner of War camp in both The First and Second World Wars.

The camp now features a marvellous little museum run by locals with a passion for preserving the history of Stalag Luft III and Stalag VIIIC next door. The North Compound, where the famous Tom, Dick and Harry Tunnels are located, has for many years now been laid out so that visitors can see many of the POW huts, the Theatre, Cooler, Sick Bay and Fire Pits etc but in recent times projects have seen the completion of a Harry Tunnel recreation, a Goon Tower and a POW hut. The latest project is a recreation of another Goon Tower, this time sited near the Harry Tunnel exit and recreated as faithfully as possible to the original.

Military History Tours has been visiting Stalag Luft III for many years now, both on the anniversary of the escape where we naturally concentrate on the escape but also later in the year when we look at the camp in more general terms. It is sad to say that nearly every year on the anniversary we are the only guests who make the pilgrimage to the exit on the night of the 24th/25th but we do acknowledge others mark the date at a more sociable hour, but that is of course now how we do things at MHT!

All of our trips have a defining moment but it has to be said that gathering on the site of Hut 104 then walking along the Tunnel path in the dead of night and arriving at the exit is something else. To stand at the spot reminds one of what one of the Great Escapers, the legendary Jimmy James himself, once said about standing at the bottom of the ladder at the foot of the exit. He could hear the breeze rushing through the trees, the bark of the dogs in the distance and looking up at the starry sky to be reminded of the RAF motto: ” Per Ardua ad Astra” – through adversity to the stars – and how fitting he thought it was. If you go you too will stand there and experience this moment before walking through the woods, unguided by torch, to try and find the train station beyond.

We have created a trip especially fitting for the 70th anniversary of the legendary escape and we are pleased to share this experience with you so that you too can share your respects to the men of Stalag Luft III and what they endured and fought to overcome. We have taken 12 rooms at nearby spa hotel which was originally built as a Wehrmacht hospital of all things. Many of our places have now sold but we do have just a few left. If you wish to come along please e mail us today so as to reserve your place on what will be a very memorable trip.

The price is £399 (less 10% discount if you an Old Contemptible) plus £30 single room supplement, where applicable.

Just £100 deposit secures a place. E mail or call us today to book your place. 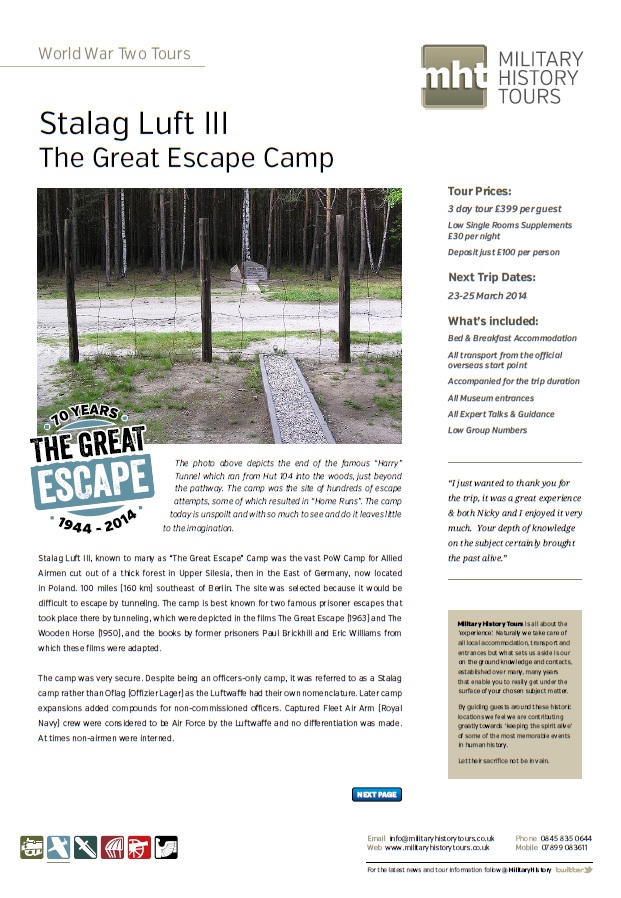